The Zuni people are closely tied to the land they have inhabited since prehistoric times in the American Southwest. They are a very peaceful people who hold the mountains, deserts and forests of their land sacred.

Zuni culture is also closely tied to their agricultural history. They settled along what is now known as the Zuni River before 2500 B.C. To this day, Zuni farmers grow wheat, maize and make beautiful baskets, pottery and jewelry.

The Zuni Indians have a clan system with a variety of ceremonies dedicated to their belief in the ancestors, or ancient ones. According to the official Pueblo of Zuni website, there are six groups, each with restrictive membership and religious structure devoted to the worship of particular supernatural entities.

In one of the most well-known festivals, known as Shalako, dancers adorn themselves to represent the “couriers of the rain” and bless new homes.

During the pueblo revolt of 1680, the Zuni people were forced to strike back at Spanish colonialists who sought to infringe on their religious beliefs, threatening the Zuni culture that had been an important part of their lives. The Zuni killed a friar in one of their villages and burned a Christian mission.

Many historians believe the tribe spared one priest, who gave up his priest’s garb and wore Zuni clothing, living out his life among the Zuni people. 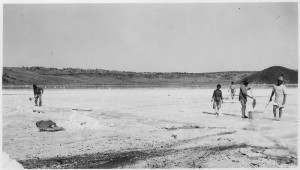 Color is another important aspect of Zuni culture. Their jewelry, ceremonial clothing and pottery is known for its vibrant use of colors. The pottery they made featured intricate carvings that told a story.

One legend states a Zuni woman was approached by a parrot and a crow, who presented her with one egg to determine which bird the people would keep around. She chose the crow because of the beautiful turquoise color of the egg.

To this day the Zuni show their love of colors through intricate turquoise jewelry featuring inlaid stones of various colors.